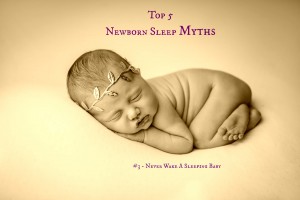 Tonight I believe that we will be touching on the one myth that out of the five is the most prominent of the series.  I also believe that this myth is the one that most moms will want to believe is true.  Newborn sleep myth number three is never wake a sleeping baby.

If this myth were true, than we would be allowing our newborns to sleep beyond their three to four hours stints, which chances are they would have slept past a scheduled feed time (approx 3 hours from start of feed to the start of the next feed).  What this would mean is we would be now having to fit in an extra feed in the current 24-hour period.  Which more then likely means our little ones are going to need an additional feed in the middle of the night.

If we choose to wake our newborn baby for a feed approximately three hours after the start of their last feed, we would be encouraging he/she to get their calories they need during the day time, instead of at night.  This is not to say that our little one won’t wake at all at night, but a newborn weighing nine pounds or more, can quickly sleep a five hour period, as long as they are getting their feeds every three hours during the day.  This also helps our newborns swap their day/night confusion, so they are awake and feeding longer during the daytime and sleeping more at night-time.

In addition this also benefits your supply, especially during the first six weeks when your body is working overload to start your supply off on a good track.

Just to let you know, I am in no way saying that you need to hold your baby out to wait for a feed until three hours have gone by, but try not to let your baby go much longer than the three hours between feeds. As always if you have any feeding issues contact your pediatrician, as well as lactation consultant or a supporter in the La Leche League (LLL) if you have chosen to breastfeed.

Continue to follow this blog site, as I have two more posts this week to wrap up our  top five newborn sleep myths.